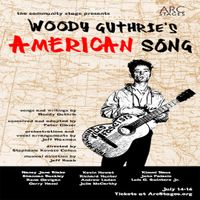 An exuberant musical celebration of America, Woody Guthrie's American Song tells the life of the folk singer through his words and music. After its debut in 1989, the musical has traveled all over America to rave reviews. The New York Times said it "manages to find both the high beauty and the earthly humor of Guthrie's love affair with America.” The musical follows Guthrie as he travels from the Dust Bowl to California and east to New York City. It includes over two dozen songs, including This Land is Your Land, So Long It’s Been Good to Know Yuh, Pastures of Plenty, Hard Travelin’, and Bound for Glory.